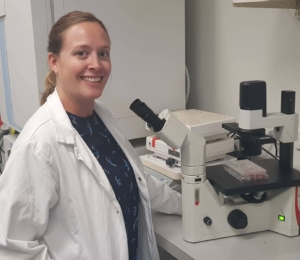 Dr Jennifer Hollywood completed her PhD in molecular medicine (2014) at University College Cork (Ireland) from which she developed expertise in gene editing to model and correct genetic diseases. In 2014, she emigrated to New Zealand to continue her research in Professor Alan Davidson’s lab at the University of Auckland. Here, Dr Hollywood developed the human induced pluripotent stem (iPS) cell and kidney organoid model of cystinosis. This work has shown that the iPS cell/organoid platform can be used to model aspects of cystinosis and has identified a new combination treatment. To investigate this therapy further, Dr Hollywood has developed a rat model of cystinosis which faithfully recapitulates the human disease and her team are now performing pre-clinical drug trials in these animals. Dr Hollywood is also investigating the effects of MFSD12 knockdown on cystine levels in cystinotic iPS cells to determine whether this gene could be a therapeutic target for new cystinotic drugs.