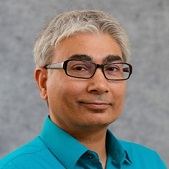 Anuj Chauhan joined the Colorado School of Mines as the Department Head in August 2019.  Prior to that he was a faculty in the Chemical Engineering department at the University of Florida from 2001-2018.

Born and raised in Jaipur, India, Anuj obtained his undergraduate degree in Chemical Engineering from the Indian Institute of Technology in Delhi, after which he moved to the United States in 1993 to pursue doctoral studies at the Levich Institute for Hydrodynamics at the City College of New York.  He pursued doctoral research on hydrodynamic stability of liquid compound jets under the guidance of Charles Maldarelli and David Rumschitzki.  After finishing his PhD in 1998, Anuj went to the University of California at Berkeley for post-doctoral research with Clay Radke on the movement and deformation of a contact lenses in eyes due to the blink-interblink cycle.    Anuj joined the University of Florida as an Assistant Professor in the Chemical Engineering department 2001.  He achieved the rank of professor in Florida’s Department of Chemical Engineering in 2011 and served as associate department head from 2013 to 2018.  He had the honor of serving as the first Dinesh O. Shah Distinguished Faculty Fellow of Chemical Engineering.

Anuj’s research interests center around transport and interfacial phenomena in biological systems particularly focusing on drug delivery.  Fascinated by the eyes, he has been pursuing many problems in ophthalmology including developing novel contact lenses for improved comfort and also using contacts for delivering drugs to treat many ocular diseases including glaucoma, Cystinosis, dry eyes, infections, allergies, macular degeneration and diabetic retinopathy.   Other problems of interest include modeling ocular physiology, developing preservative free multidose eye-drops, and understanding tear film drainage and breakage. His work on ophthalmic drug delivery via contact lenses was named one of the Medical Breakthroughs of the Year by Readers Digest in 2004 and received media coverage in many countries.  His research goals include translating his research to commercialization, hoping to make a significant positive impact on the patients’ lives.  A start-up company is currently conducting clinical studies with technology developed in Anuj’s lab for managing glaucoma using contact lenses and another start up is focusing on developing multidose preservative free eyedrops.  He has published 140 papers and submitted 30 patent applications.  Many of these patents are licensed by large companies and startups.

Professor Chauhan is a previous recipient of MRCG-HRB project funding with Cystinosis Ireland as a joint funding partner.