The annual Dublin Cystinosis Workshop was held online on Thursday 21st April 2022, creating collaborations and conversations between world class researchers and clinicians. Now in its eighth year, this unique event allows those active or interested in cystinosis research to share their insights and most recent findings as efforts continue to identify new drug targets and effective therapies for cystinosis and ultimately to find a cure for this ultra-rare disease.

Several new treatments were discussed at the meeting; for example, a proof-of-concept study found that the gene MFSD12 may be a viable therapeutic target for a new class of cystinosis drugs. Meanwhile, a drug combination of cysteamine and everolimus has shown promise in mice – addressing issues caused by cystinosis while also preserving kidney function. Cell and gene-based therapies are showing curative potential and research in this area is making significant ground. According to studies carried out in mice, early therapy with a drug called ELX-03 could prevent progressive Fanconi Syndrome. Excitingly, the prodrug CF10 is due to start clinical trials in 2024. In addition, new therapies may be en route for issues such as cystinosis myopathy.

Efforts to improve the quality of life of cystinosis patients are also bearing fruit; for example, it was reported that whole body vibration therapy is safe and effective and early results show that an exercise programme that incorporates it appears to help improve muscle strength and balance in people with cystinosis. One of the keynote scientific speakers, Dr Andreas Natsch, head of in vitro Molecular Screening at Givaudan Schweiz in Switzerland, outlined how body odour has a significant impact on quality of life for cystinosis patients. He explained that scientists had recently gained a better understanding of the processes involved in odour release, and thus may be able to manipulate the release of the odour-causing compounds. New vitamin E technology used in contact lenses appears to allow for the sustained release of cysteamine for as long as eight hours, meaning administration of large quantities of eyedrops could be a thing of the past for cystinosis patients.

Another keynote scientific speaker, Professor Paul Grimm, Professor of Paediatrics (Nephrology) at Stanford University, outlined a groundbreaking new procedure whereby a combined stem cell and kidney transplant are carried out at the same time with a view to leaving the patient drug free.

A fitting presentation was the one given by Public Patient Involvement Manager at the RCSI University of Medical and Health Sciences in Dublin, Ms Lorna Kerin. She noted that patient involvement in research from the very earliest stages is not just a “nice to have” but a must-have. This involvement must be meaningful and not tokenistic. Cystinosis Ireland is well placed to lead high impact PPI, with a well-motivated and highly educated patient population. “People with cystinosis have the expertise on how to live with the disease but also they have educated themselves beyond what people living with other more common diseases have done,” agreed Ann Marie O’Dowd of Cystinosis Ireland.

The winner of the 2022 Prof Roz Anderson Memorial Prize was Elena Sendino Garví.  Elena is a PhD candidate at the Utrecht Institute for Pharmaceutical Sciences (UIPS), in Utrecht, the Netherlands. The Prize is awarded to the best short science communication at the Dublin Cystinosis Workshop, as voted on by the attendees and celebrates the life and work of Prof Anderson, a staunch supporter of the cystinosis community and a leading researcher in the field.   Elena’s current research focuses on kidney ciliopathies and tubulopathies, with the aim of using drug repurposing approaches and gene-editing (Crispr-Cas9) to restore the cell function of these kidney conditions. At the moment, she is working on the development of a new 3-D bioengineered model for nephropathic cystinosis, in addition to the restoration the gene function and phenotype of cystinotic cell lines using Crispr-Cas9 HITI approach.

The DCW creates a creates a sense of community among researchers, clinicians, family members and those living with cystinosis. It creates a sense of belonging to something special with a shared common goal. We hope our 9th annual DCW 2023 will take place in person and will be just as impactful as this year’s event. 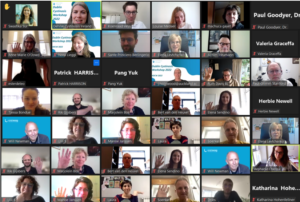